The region of the body between head and chest (thorax); anatomists use the adjective cervical for this zone.

Structurally there are seven cervical vertebrae with closely associated muscle groups. The great vessels, carotid arteries and jugular veins lie deep to the sterno-cleido-mastoid muscle and typically pulsations are sought there. This very visible muscle extends obliquely from the inner aspect of the collar bone to insert behind the ear at the mastoid process of the skull.

In the space between the two sternomastoid (cleido is commonly omitted) muscles is the centrally placed trachea (windpipe) and the prominent larynx (voice box); the most prominent feature is the notched thyroid cartilage. Below that is the cricoid cartilage and above it, beneath the jaw, the invisible but easily felt “wishbone-shaped” hyoid bone – the medical examiner expects to find this broken in cases of manual strangulation.

The esophagus (gullet) lies behind the trachea and cannot readily be discerned there; it is, however, mobile and both trachea and esophagus can be pushed aside in the lower neck so one can feel the anterior aspect of the lower cervical vertebrae – in fact an approach commonly used in operations on the cervical discs. The tips of the transverse processes of the first cervical vertebra (atlas) can be felt between the angle of the mandible and the mastoid process.

Lymph nodes lie alongside the great vessels deep to sternomastoid, the grouping known as “anterior triangle” since for convenience in description the sternomastoid divides the neck into anterior and posterior triangles. Usually these cannot be palpated, sometimes an upper node, called tonsillar can be felt.

The sloping appearance of the posterior neck is given by the trapezius muscle, the two together produce a cowl-like appearance when the head and shoulders are viewed from behind.

In the posterior triangle, between sterno-mastoid and trapezius, can be felt the bundle of emerging nerve structures which form the brachial plexus. 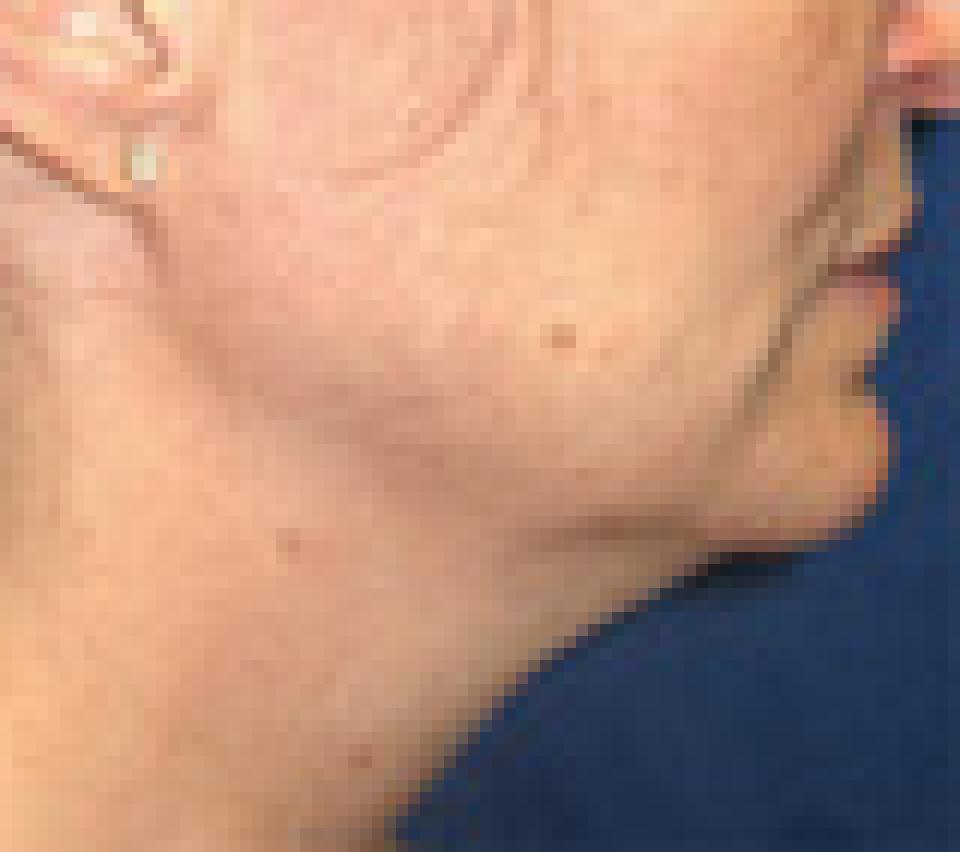 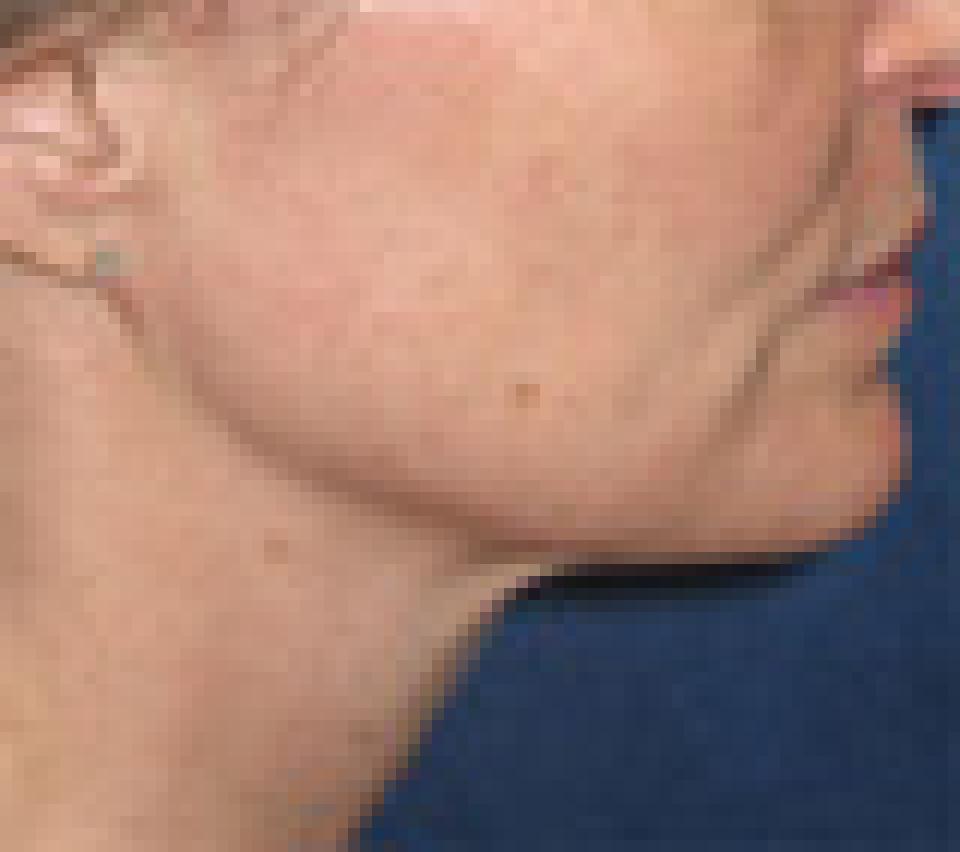 This case depicts a 41 year old woman who wanted to achieve a more youthful appearance to her neck. Because she had good skin quality, Dr. Belsley felt that her skin would retract appropriately after liposuction. She underwent ultrasound assisted liposuction of the upper neck. Her post-operative photographs show her at just over two months after surgery.

Our face and its features are what makes us individual and human. Time modifies our appearance. With appropriate care and intervention, the changes that occur over time will enhance our inner beauty and not detract from it. 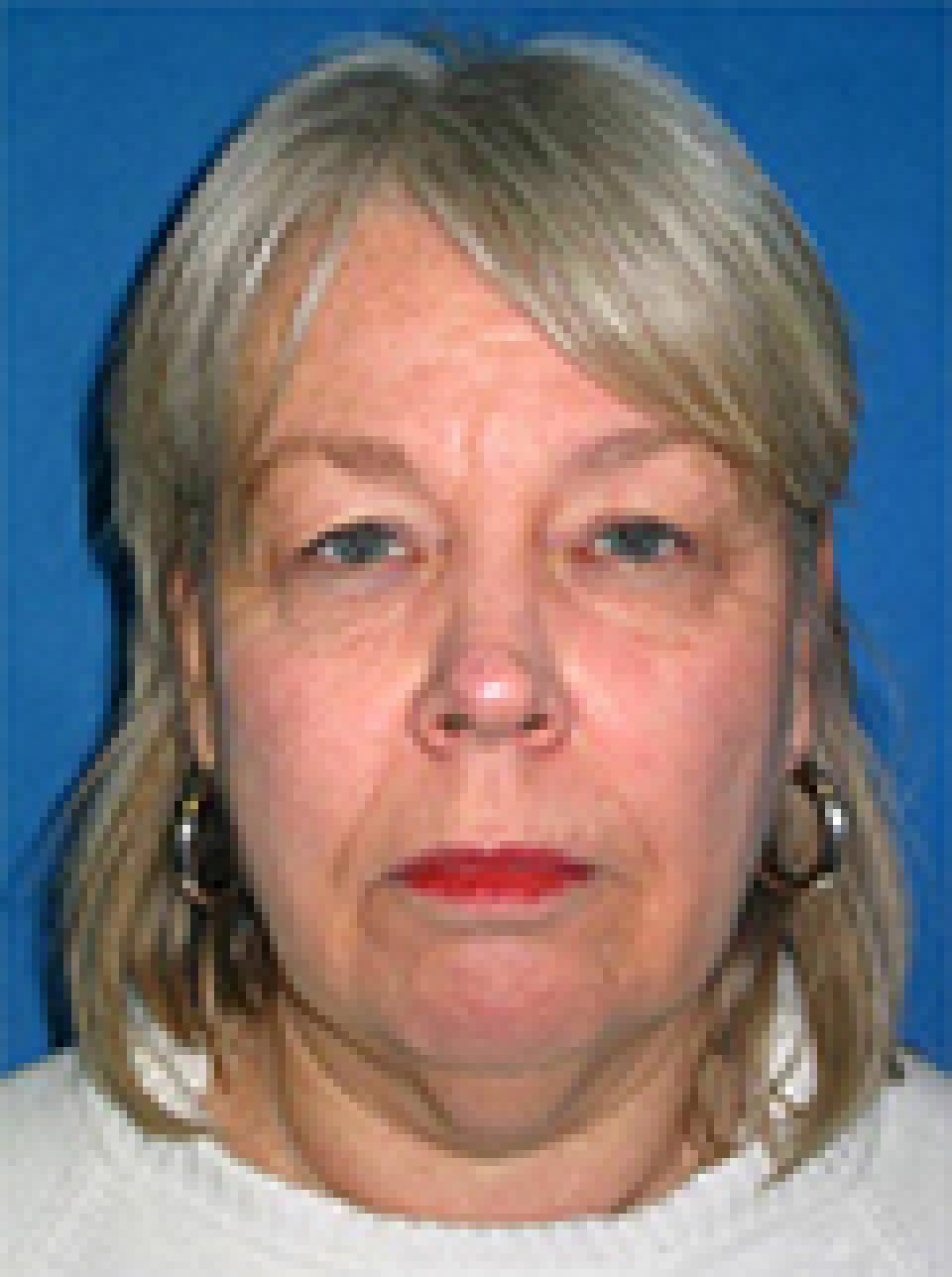 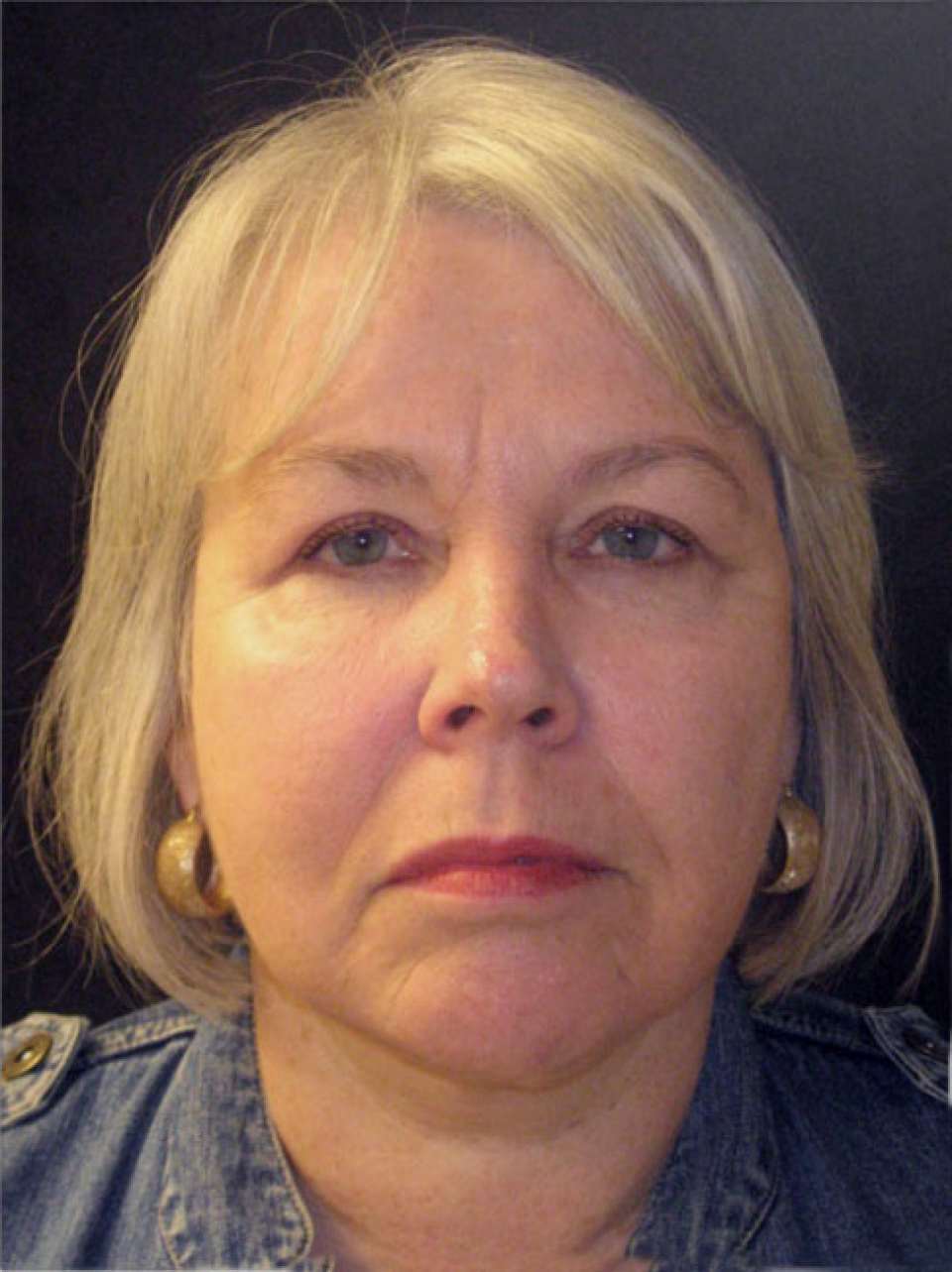 This case depicts a 57 year old woman who wanted to achieve a more youthful appearance. She underwent an upper and lower eyelid lift, a face lift and a neck lift.

Her post-operative photographs show her just under six months after surgery.

The gentle curve of the neck after surgery approximates the appearance of this individual's neck when she was in her 20's.

Ultrasound assisted liposuction to the neck and jowl region 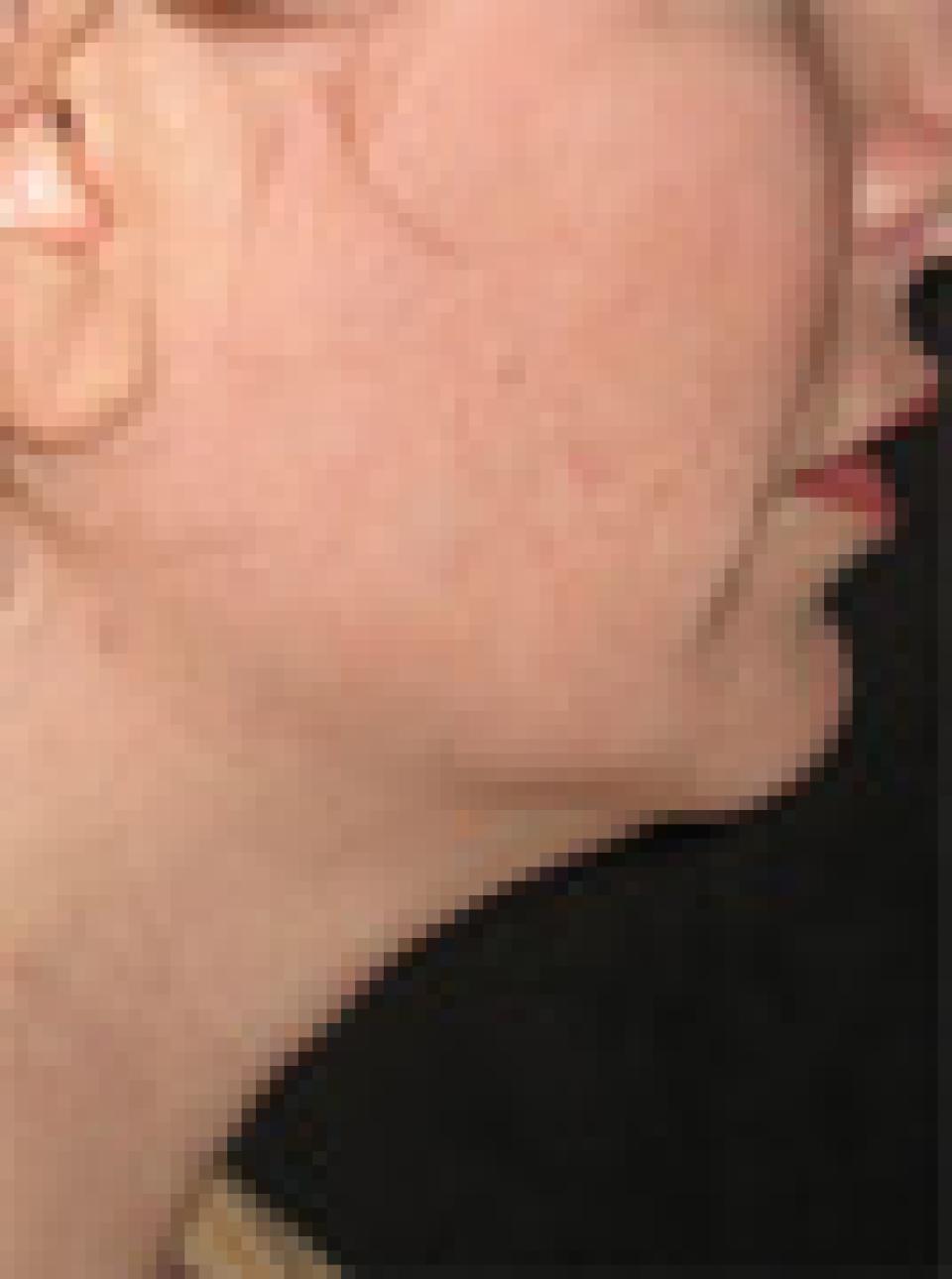 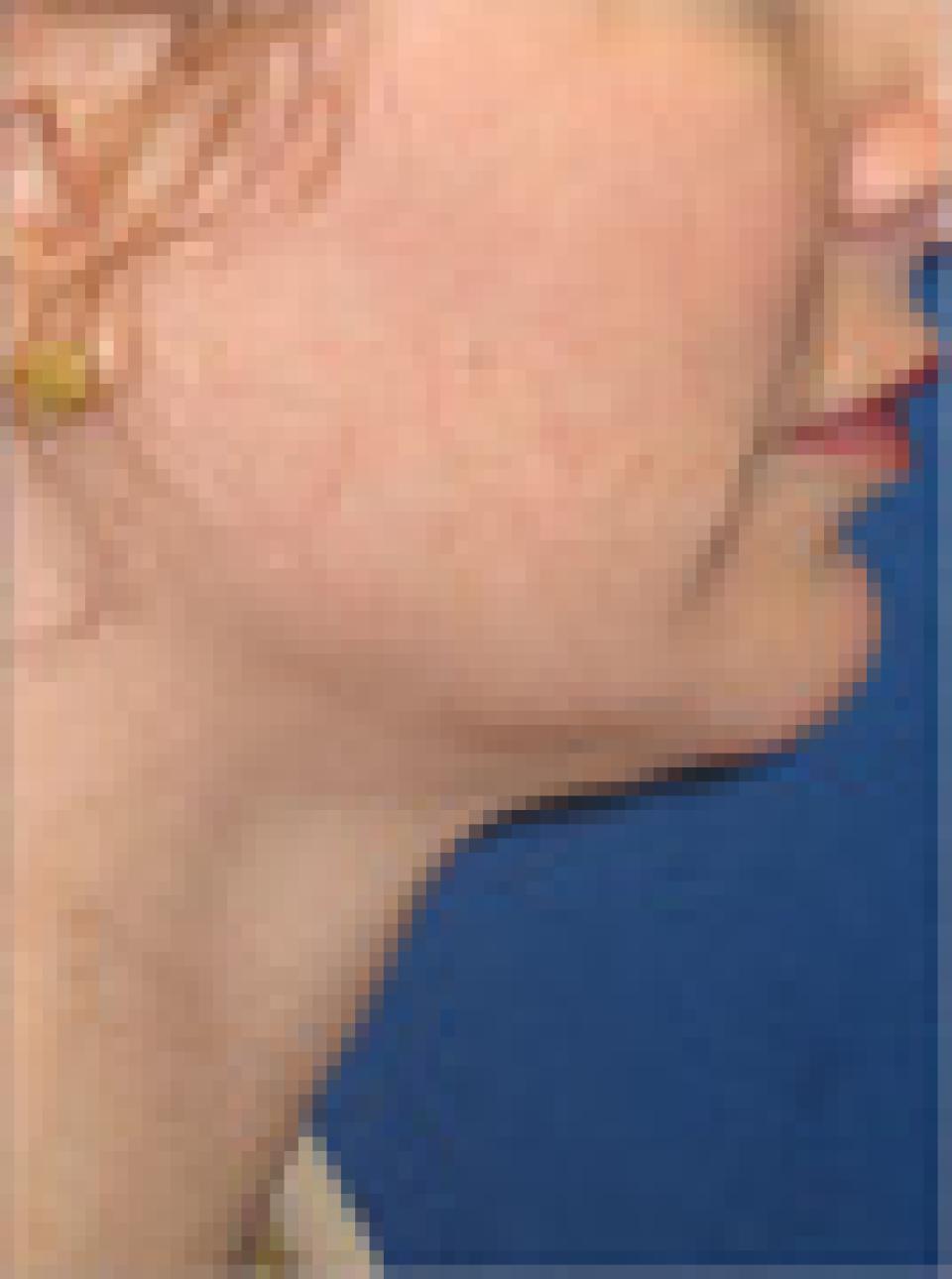 This case depicts a 47 year old woman who wished to improve the appearance of her neck and jawline.

Because I felt that her skin elasticity (i.e., the ability of the skin to "snap back") was excellent for her age, I performed ultrasound assisted liposuction to the neck and jowl region without a face lift. Her post-operative photographs show her at approximately two and a half months after surgery.

Ultrasound assisted liposuction can be utilized to address the cheek and jowl region as well as the neck.

Individuals who are candidates should have good skin elasticity and an excess of fat without a significant excess of skin.  Typically, individuals who are good candidates for this procedure are in their twenties and thirties and sometimes their early forties.  Once an individual is over the age of 45, it is rare that they do not look much better with at least a short scar face lift to address sagging skin and jowls. 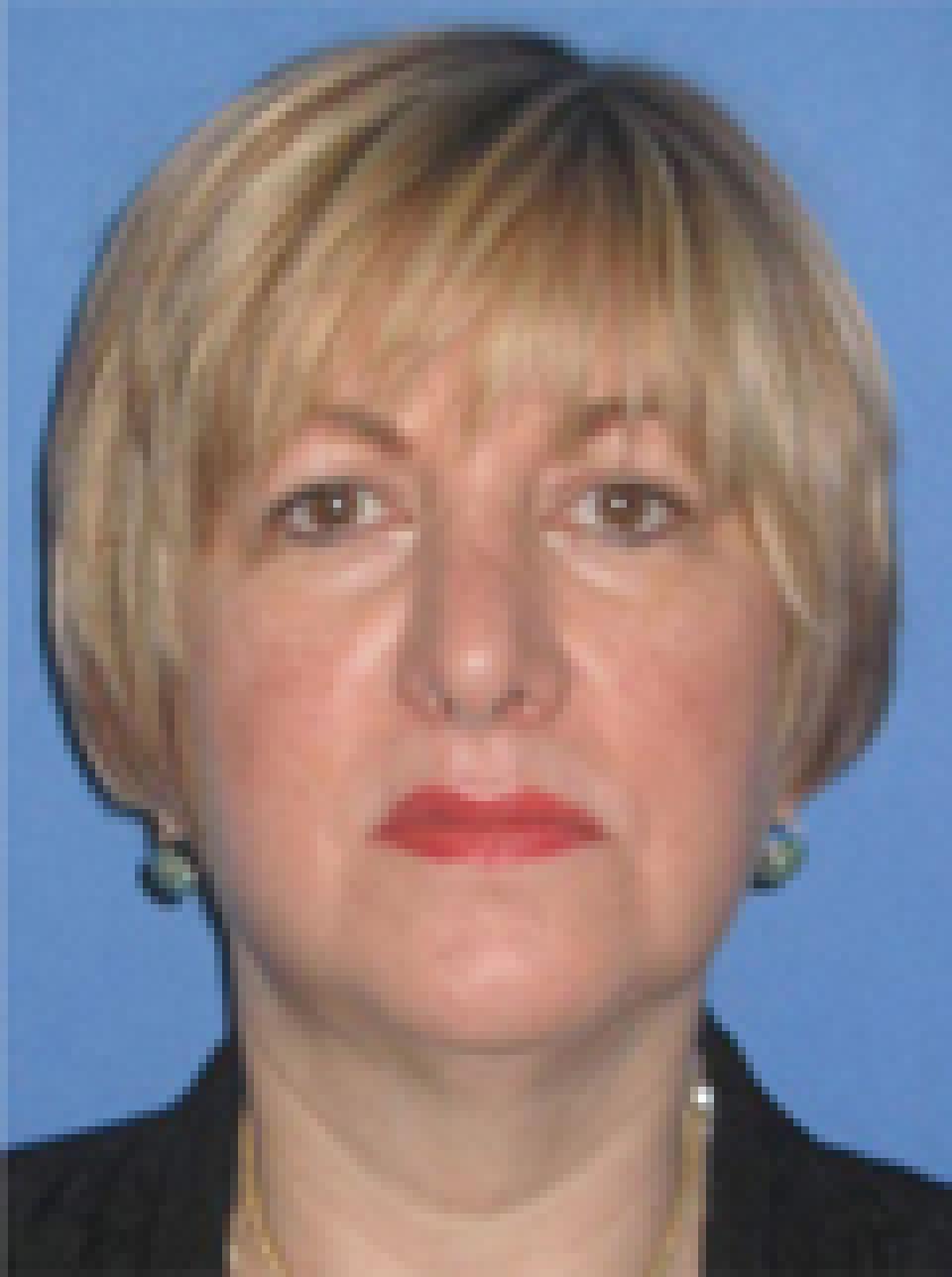 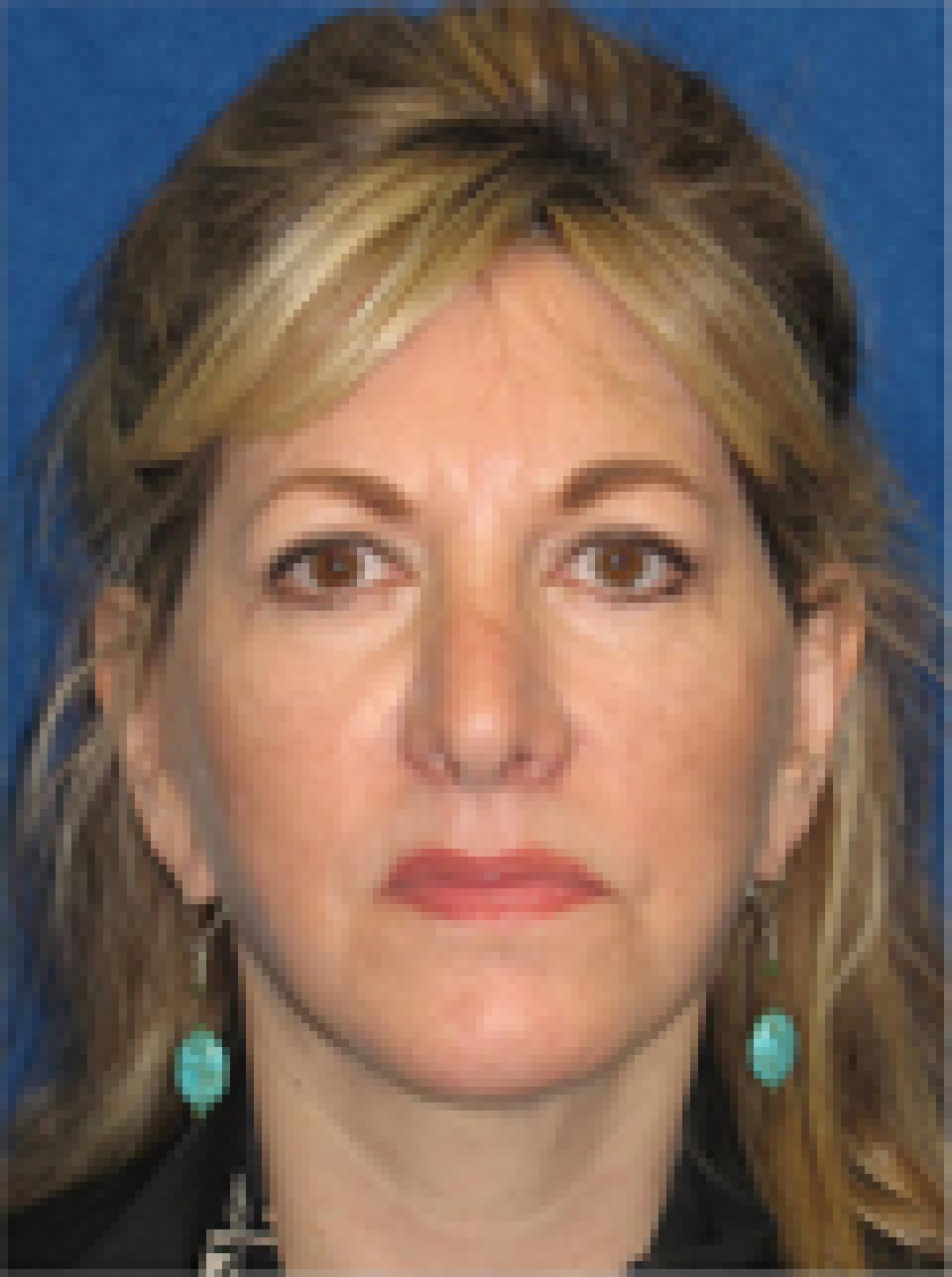 This case depicts a 59 year old woman who wanted to achieve a more youthful appearance. She was specifically concerned with her jowls and the fullness beneath her neck. She underwent an upper eyelid lift, a lower eyelid lift, a short scar face lift and ultrasound assisted liposuction of her neck and jowls.

The pictures show her approximately six months after surgery. The lower eyelid lift performed in this case did not involve removal of the fat that normally resides in the lower eyelid.

Instead, the fat was repositioned to fill in the hollows of the lower eyelids, making the transition from the lower eyelid to the cheek smoother and more aesthetically attractive. 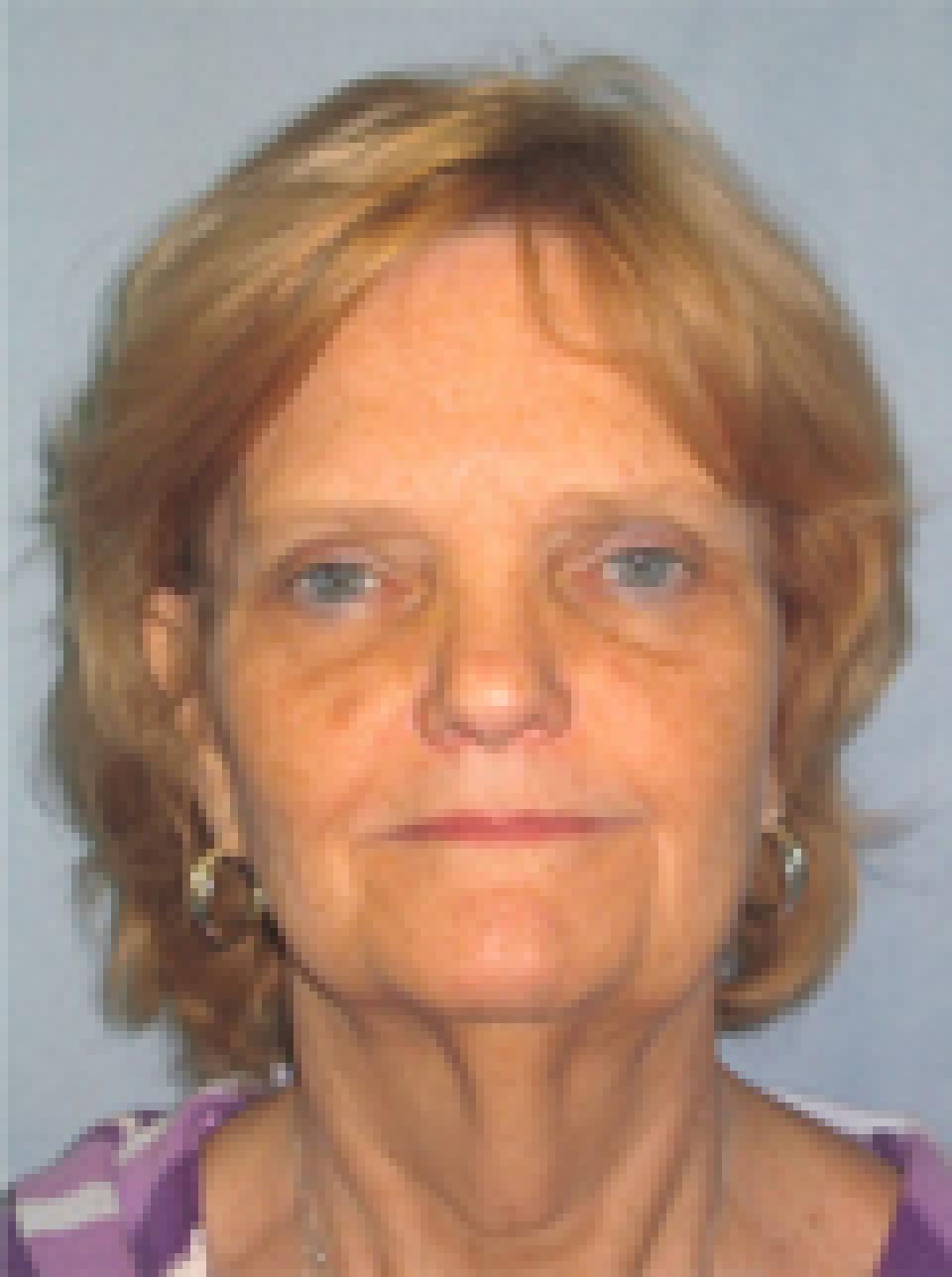 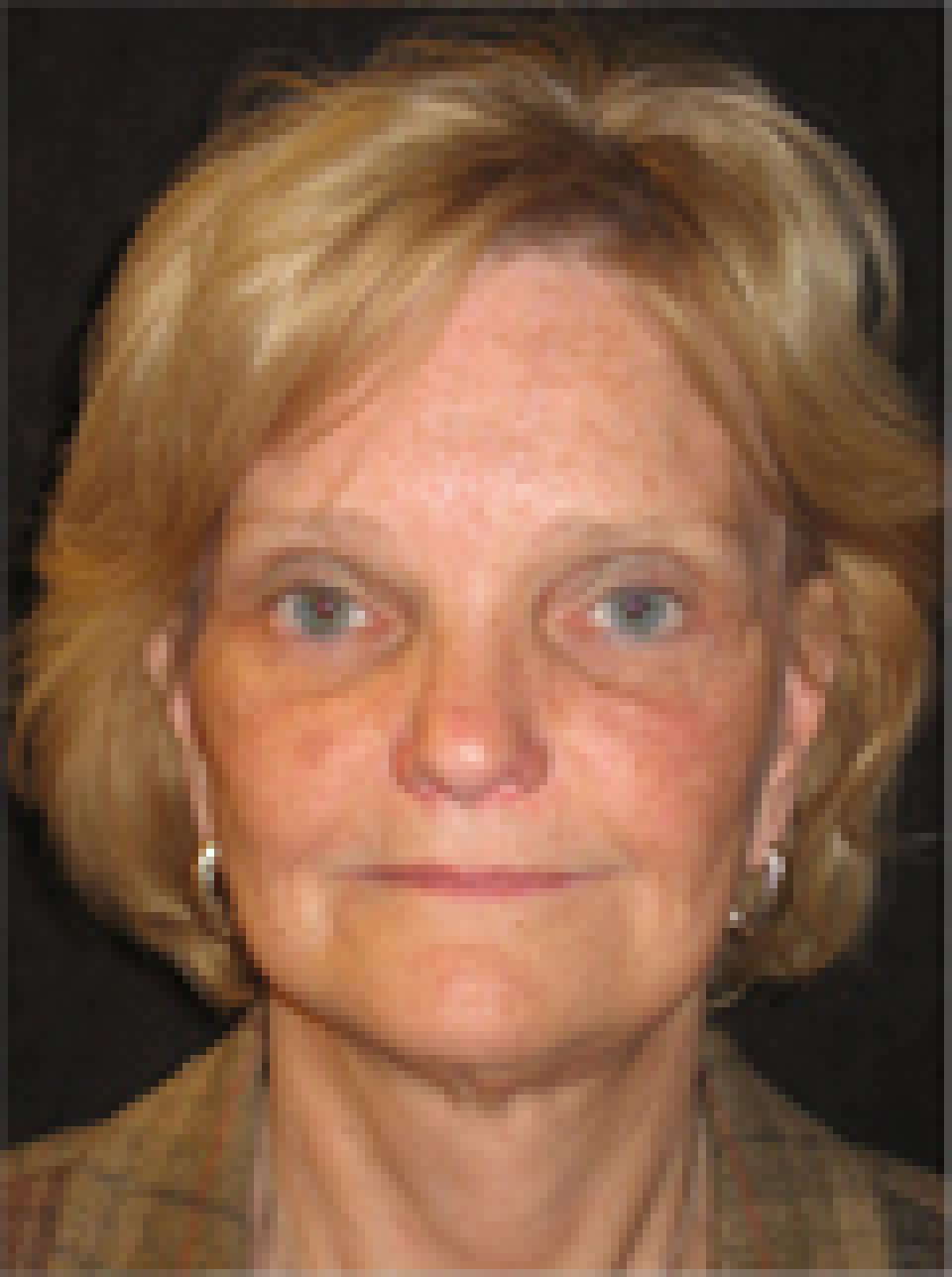 This case depicts a 56 year old woman who wished to improve the appearance of sagging skin that she had developed as a result of age and dramatic weight loss.

She underwent an endoscopic brow lift, upper and lower eyelid lifts, a short scar face lift and a neck lift. Her post-operative photographs depict her appearance at approximately 4 months after surgery.

Although a properly executed short scar face lift can effect some improvement in the appearance of sagging skin in the neck with no incisions behind the ears, individuals with an extensive amount of skin and muscle descent require longer incisions and a formal neck lift to achieve dramatic results.